According to data presented at this years' European Breast Cancer Conference (EBCC) in Vienna, radiotherapy treatment after surgery for ductal carcinoma in situ (DCIS) still has a major preventive effect against recurrence more than 15 years later. Investigators found that the use of radiotherapy in addition to surgery could reduce the chances of a local recurrence by 50%. This held true for both DCIS recurrences and for invasive breast carcinomas.

The number of DCIS cases has increased in the past few decades and currently account for almost 25% of all new breast cancers diagnosed. Until the introduction of breast cancer screening, DCIS was often overlooked and was not diagnosed until it had developed into an invasive breast cancer. Detecting an in situ lesion of the breast enables the patient to be treated at a very early stage of the disease. However, this also poses the problem of overtreating for a lesion that would not have developed into a life-threatening cancer. This is the reason why it is important to be able to study the biological behaviour and the malignant potential of these in situ breast cancers in clinical trials with a long follow-up. The study at hand provides convincing evidence that early treatment does work and that it can help to avoid more severe therapies at a later stage.

Interestingly, the majority of DCIS recurrences occurred within five years after treatment, and the radiotherapy seemed to have a continuous protective effect on DCIS recurrence in the long term. However, the protective effect of radiotherapy on the onset of invasive local recurrence seemed to be observed mainly in the first five years after treatment, while the risk of developing a recurrence was more or less continuous over the years. Distant metastases and overall survival were also analysed, but the observed difference in local recurrence rate did not translate in a difference in the incidence of distant metastases or death. Although no survival difference was seen between the surgery alone and the surgery plus radiotherapy group, women with an invasive recurrence had a significantly worse survival compared with those who had a DCIS recurrence or no recurrence at all (HR >17). 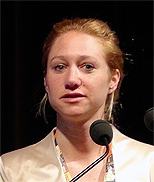