Five-year follow-up data from the RASTER study indicate that testing a breast cancer tumour for its genomic signature can help identify which patients will need adjuvant systemic therapy after surgery, and spare its use for whom it is not necessary. These data support the use of a 70-gene signature to stratify patients who are candidates for adjuvant chemotherapy. As such, using this gene-signature in addition to clinicopathological factors could lead to a 29% reduction in chemotherapy use, without affecting clinical outcome.

The 70-gene signature (MammaPrint®) was developed to predict the risk of distant metastases in the first five years after diagnosis. During the 2012 European Breast Cancer Conference (EBCC), clinical follow-up data were presented for 427 patients with node-negative, primary breast cancer who had participated in the microarray prognostics in breast cancer (RASTER) study and for whom a 70-gene signature had been obtained. The study aimed to assess the feasibility of implementing the 70-gene test in daily clinical practice, as well as its effect on adjuvant systemic treatment decisions. In addition to the results of the 70-gene test, investigators also used the risk-prediction tool Adjuvant!Online in order to obtain a prognosis.

The median follow-up period in this study was 62 months. In the group classified as low risk by the 70-gene test, only 15% of the 219 patients received adjuvant chemotherapy as opposed to 81% (169/208) in the group classified as high risk. The low-risk group had a median distant disease free survival (DDFS) rate of 96% compared with 90% in the high risk group. In 161 of the patients the Mammaprint® and Adjuvant!Online results were discordant. A complete overview of the 5-year follow-up data can be found in table 1.

The investigators concluded that the 5-year DDFS and the 5-year DRFI probabilities confirm the additional prognostic value of the 70-gene signature to the clinicopathological features used in Adjuvant!Online risk estimations. They calculated that, if the 70-gene signature were added to the standard guidelines to select patients for adjuvant chemotherapy, a reduction of 29% in the use of adjuvant chemotherapy would be seen. Furthermore, omitting chemotherapy as judged appropriate by doctors and patients and supported by a low-risk 70-gene score did not affect survival. Initially the 70-gene test needed to be carried out on fresh-frozen tissue, which involved complicated and expensive logistics. However, since January, technical advances have been made to the test allowing researchers to use formalin-fixed and paraffin-embedded tissue, which significantly enhances the availability of the test. 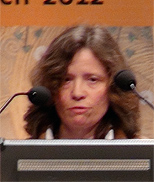