According to the results of a randomised trial presented at this years’ European Breast Cancer Congress (EBCC), the use of ultrasound-guided surgery for the removal of tumors from women with palpable breast cancer is much more successful than standard surgery in excising all the cancerous tissue, while sparing as much healthy tissue as possible. Using this technique, breast surgeons were able to remove 96.7% of all palpable tumors with adequate tumor free margins. Furthermore, the unnecessary resection of healthy tissue was significantly reduced.

Among the 61 women in the USS group, only 3.3% of the margins contained cancerous cells, compared with 16.4% among the 63 women treated with PGS. As a result, USS was associated with a significant reduction in the number of re-excisions, mastectomies and irradiation boosts compared to PGS. Furthermore, the excision volumes were significantly smaller with USS compared to PGS (40 cubic centimeters vs. 58 cubic centimeters; p<0.05). By measuring the volume of the tissue excised during surgery and the actual tumor diameters, the researchers calculated the excess of healthy tissue that had been removed, resulting in a ‘calculated resection ratio’ (CRR). A CRR of 1.0 would indicate that the ideal amount of tissue had been removed, while a CRR of 2 would mean that double the amount necessary had been excised. The study showed that USS was associated with an optimal CRR of 1.0, while the PGS group had a median CRR of 1.9 (p<0.05).

These results clearly show that USS can prevent the unacceptably high rate of margins containing cancer cells in palpable breast cancer excision, thus avoiding additional surgery or radiation. Furthermore, USS largely reduces the amount of unnecessary removed healthy tissue, thereby contributing to the improvement of cosmetic results. Although the implications of these data are huge, one needs to acknowledge that this is only a report of a single hospital and that these finding need confirmation from other teams of surgeons. Nevertheless, USS offers the promise of more successful breast conserving surgery for women with early breast cancer. 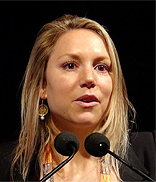