Overweight women have a greater risk of breast cancer recurrence, even after dose-adjustment of chemotherapy

A new study presented during the 8th European Breast Cancer Conference (EBCC) indicates that women who are overweight or obese at the time of their breast cancer diagnosis have a significantly higher risk of cancer recurrence and related death than women who are leaner at the time of diagnosis. Interestingly, this finding held true even though the study protocol mandated dose adjustments according to body weight for the chemotherapy used. This adds further evidence to the hypothesis that lifestyle factors influence cancer prognosis.

Previous observational studies have shown that women who are overweight or obese at the time of their breast cancer diagnosis have a higher recurrence risk. However, questions have been raised to whether obese women were receiving relatively lower doses of chemotherapy due to their weight which could explain the higher recurrence rate. Therefore a study was set up that mandated patients to receive a chemotherapy dose adjusted to their body weight. Between 1997 and 1999, a total of 1,909 women were enrolled in the CALGB 9741 study that was set up to investigate the different dosing schedules for adjuvant chemotherapy in patients with node-positive breast cancer. The investigators extracted height and weight data from the patient records and then assessed the relationship between the body mass index (BMI) and relapse free survival (RFS) and overall survival (OS). The study population of CALGB 9741 contained 1.2% underweight patients, 32.6% of patients with a normal weight, 32.9% overweight patients and 33.3% of the patients was obese.

This study indicated that BMI was related to both RFS and OS. In fact, each unit increase in BMI corresponded to an increase of approximately 1.5% in RFS failure (e.g. a BMI increase from 22 to 27 means an increase of 8% in the recurrence risk). Similarly, each unit increase in BMI corresponded to a 1.5% increased risk of death. Previous studies suggested a relationship between the impact of body weight and estrogen receptor status. However, this study did not show a significant interaction between BMI and ER status for RFS (p=0.87) nor for OS (p=0.53).

In summary, this study clearly shows that overweight and obese breast cancer patients have an increased recurrence risk even after dose adjustment for chemotherapy. Given the ever increasing incidence of obesity it becomes more and more important to find out as much as possible about the relationship between body weight and breast cancer. 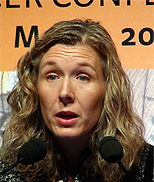