During the 2012 European Breast Cancer Conference, Dr Christof Vulsteke from the Catholic University Leuven presented data from the largest study ever on the effect of genetic variability on the toxicity in breast cancer. These data showed that it is possible to predict which patients are most likely to suffer from serious side effects. In the study at hand, germline DNA was extracted from blood samples from 1,089 breast cancer patients who were treated between 2000 and 2010 with three commonly used chemotherapeutic agents (i.e. fluorouracil, epirubicin and cyclophosphamide). For every patient, the variability in the genes involved in the metabolism of these drugs was compared with the reported side effects.

Investigating these genes before starting chemotherapy would allow supporting the patient with either growth factors to increase the patient’s immunity, or dose modifications, or a different chemotherapy regimen better adapted to the patient. Currently, most patients receive standard treatment, however the side effects they suffer can be very different ranging from severe to very minimal reactions. As such, these results could mean one step closer towards prescribing personalised chemotherapy with a minimum of side effects.

Researchers from this study are now looking for other European centers to validate their data but will also continue to follow-up the patients in this study. As such, in 2016, they will have a very accurate assessment of the impact of genetic variations on breast cancer survival and disease recurrence. 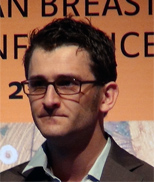